Showing posts from March, 2018
Show All

- March 27, 2018
* New iPad Released *
Released overnight a shiny new iPad has been released. iPad '6th' generation is targeted at education and in short, is more powerful than the previous iPad using the A10 Fusion chip, but significantly, adds support for the new Logitech Crayon and Apple Pencil unleashing a whole new world of creative Apps only previously available on iPad Pro. Integrated also with the OS are new versions of Pages, Numbers and Keynote that support markup, Apple Classroom with upcoming support for Mac also and al all new classroom collaboration App coming call School Work. All of these new technologies tightly linked into Apple Schools Manager for content distribution via your MDM - and if you have not yet streamlined and set up your choice of MDM and are not already using the DEP, talk to us. We're experts in this field and let us deploy your new iPads comprehensively and show you how powerful they can be at your school! The new iPad is available from today and will be a…
Post a comment
Read more

- March 13, 2018
MacBook Air is on special until Friday 16th. Don't miss it, huge savings on the most popular Mac laptop.
Post a comment
Read more 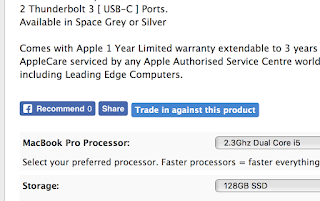 As your Mac or Apple device will be valued by a human who has bene doing this for over 20 years, right here at LEC Port Macquarie, and not a machine or automated database, our pricing is always far better than generic trade-in services and saves you the headache of selling privately. Try it, there's no commitment! - lecport.,com.au